also known by Brockvillians as the old “Orange Lodge Building” 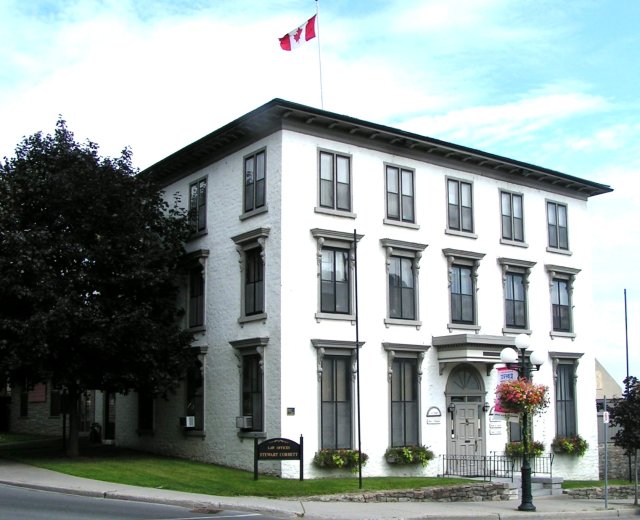 This building has a very long and interesting history. The property is a piece of land given by William Buell to his daughter, Sabina Flynn, the wife of David Flynn, in 1810. She retained possession until 1824 when she sold it to Dr. Elnathan Hubbell for £100.

Hubbell had arrived in Brockville from Vermont about 1806. He, at some point, built a brick house on the main street on the site of the former Woolworth Store (36-40 King St. W.). That house was said to be the first brick house built in Buell’s Bay. It is not known for sure when Hubbell built this stone structure on Court House Ave., what its original purpose was, or even what it looked like originally.

The first known reference to this building was an item in the Brockville Recorder newspaper of August 2, 1833: “Henry Sherwood has removed his office into the large stone house belonging to Dr. Hubbell, situated upon the public ground in front of the Court House”. It has been said over the years that this building was used as a hotel during the War of 1837-38. This may mean that soldiers of visiting militia companies were housed here during the “Patriot” crisis. But no definite proof has been discovered to prove this point. However, we do have a lot of evidence of its use as a bank building for nearly 80 years.

This 3-storey building, then owned by Dr. Elnathan Hubbell, stands at the top of Court House Ave. on the right, as depicted in this 1849 engraved illustration from a Canadian magazine, “The Maple Leaf“.

The Brockville agency of the Bank of Montreal was established in Brockville in the year 1843. We don’t know where they first located the bank that year, but the first agent is known to have been James Stevenson who remained in Brockville until 1849. The next agent was Thomas Lee, and a business directory published in 1851 gives the information that the Bank of Montreal was located on Court House Square and, therefore, was leasing space in Hubbell’s Building by that time. The Brockville map of 1853 shows the “Bank of Montreal” on this site and lists F.M. Holmes as the agent. 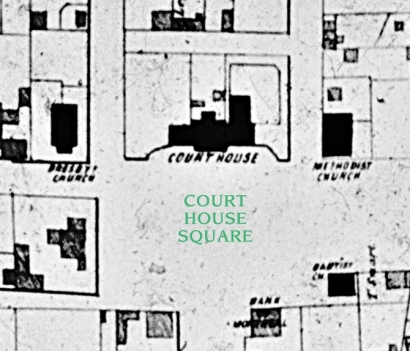 From the 1853 map of Brockville, during the period that the Bank of Montreal leased this building from Dr. Elnathan Hubbell.

Dr. Hubbell died on April 8, 1866 at the age of 74, and his property passed into the control of his sons. This was also the time that the directors of the Bank Of Montreal decided to build their, own building. They chose a site south of the Wesleyan Methodist Church (now, Wall St. United Church) on the east side of the Square, and were able to move into their new building in 1857. The same year, one of their competitors, the Commercial Bank, decided to take over their old location on Court House Ave. James and Henry Hubbell sold their father’s building to the Commercial Bank on December 16, 1857 for £1387. James Bancroft is listed as the manager that year and also in 1861.

A recent discovery was made that referred  to this building, in a microfilmed copy of the Brockville Recorder, dated January 14, 1858. It was the announcement that tenders are invited from “parties willing to contract for certain alterations to be made to a house and appurtenances at the corner of Court House Square and Court House Avenue”. The small ad was placed by John Power, Architect of Kingston for the Commercial Bank of Canada. This is the answer to a question about when the building received the alterations that created its present appearance. This is the common look that many Canadian banks were trying to present in the mid-1850s. The Bank of Montreal in its new location looked very similar when it was built the previous year.

The last record we have of the Commercial Bank of Canada, Brockville branch, was in 1867 with J.H. Roper as manager. It is known that later the Commercial Bank failed and had to close all their branches. The Merchant’s Bank of Canada took over their assets, including this building, and put it up for sale in 1869. A Brockville merchant, Thomas R. Sheffield purchased it for $5000.
For two years, while owned by Alphonzo Brooks, a civil engineer, there was no bank here, but on January 3, 1873, a new branch of the Molson’s Bank opened up at 21 Court House Ave. That same year, Brooks sold the building to Mrs. Margaret Hargraves for $6500. The first manager of the Molson’s Bank in Brockville was James W.B. Rivers, who held that position until the end of 1885. The bank, meanwhile, in January of 1874 purchased the building from the widow Hargraves for $8000.

In this 1895 photograph, the Molson’s Bank Building is on the left.

Altogether, the Molson’s Bank carried on business here for a total of 51 years, during which time the name “Molson’s Bank Building” became attached to the building previously owned by Elnathan Hubbell. Over the years there was a total of eight managers in charge of the Molson’s Bank in Brockville, but none served as long as James Rivers. While the ground floor was the banking hall it appears that a number of the managers following Mr. Rivers, lived upstairs during their stay in Brockville. In 1925, Molson’s merged with the Bank of Montreal and sometime after, the bank in this building closed.

In 1927 the Directors of the Loyal Orange Lodge No. 1 purchased Hubbell’s Building from the Bank Of Montreal, and for the next fifty years the upstairs housed the Ogle R. Gowan Temple and the Orange Hall.

Later, in the 1950s, another tradition started on the ground floor when the law firm of Jack and Ned Stewart rented office space here. They were the sons of the former Federal Minister of Public Works, Hugh A. Stewart. In 1954, a second law partnership, made up of John Corbett and Howard Musclow, became tenants in the small annex (now demolished) on the south side of this building. In 1956 the two firms were merged and the new firm took the name “Stewart, Corbett & Musclow”. In 1967, Bob Barr joined as the fourth senior partner. The later firm of Stewart, Corbett, Musclow, Barr & Simpson purchased the building in 1976 from the Orange Lodge who had built themselves a new lodge building just to the east of Hubbell’s Building. The law firm took over the entire building for their own purposes, carrying out extensive renovations in 1977.

Architecturally, Hubbell’s Building is a special example of a large 3-storey office building created in a earlier period of local branch banking. Its present appearance is representative of a style of building erected by the early banks as a symbol of strength and taste.

Historically, it is very hard to determine why this building was built in the first place. As far as can be learned at this point, Dr. Hubbell did not live here at all, or did members of his family. As well as being a medical man, his Interests included operating a grist will on the mill pond west of the Grand Trunk railway station on Perth St.

In any case, this building stands today in a proud position on the edge of
Court House Square and has a lot of tradition contained in its stone walls.

The material on this History WebLog can be copied by anyone for personal use. This includes text, photographs, drawings, and maps.

I believe that our history should be shared.

Otherwise, appropriate credit would be appreciated.

My other BROCKVILLE HISTORY WEB SITES:

My Newspaper ARTICLES on the Issuu.com site

“To me, history ought to be a source of pleasure. It isn't just part of our civic responsibility. To me, it's an enlargement of the experience of being alive, just the way literature or art or music is.”
― David McCullough

“The only thing new in the world is the history you do not know.”
― Harry S. Truman

"To be ignorant of what occurred before you were born is to remain always a child."
― Marcus Tullius Cicero

“There's an old saying about those who forget history. I don't remember it, but it's good.”
― Stephen Colbert

“The farther backward you can look, the farther forward you are likely to see.”
― Winston Churchill

“History is that certainty produced at the point where the imperfections of memory meet the inadequacies of documentation.”
― Julian Barnes, "The Sense of an Ending"